NieuwsPlanted and cultivated with love
November 15, 2021

Planted and cultivated with love 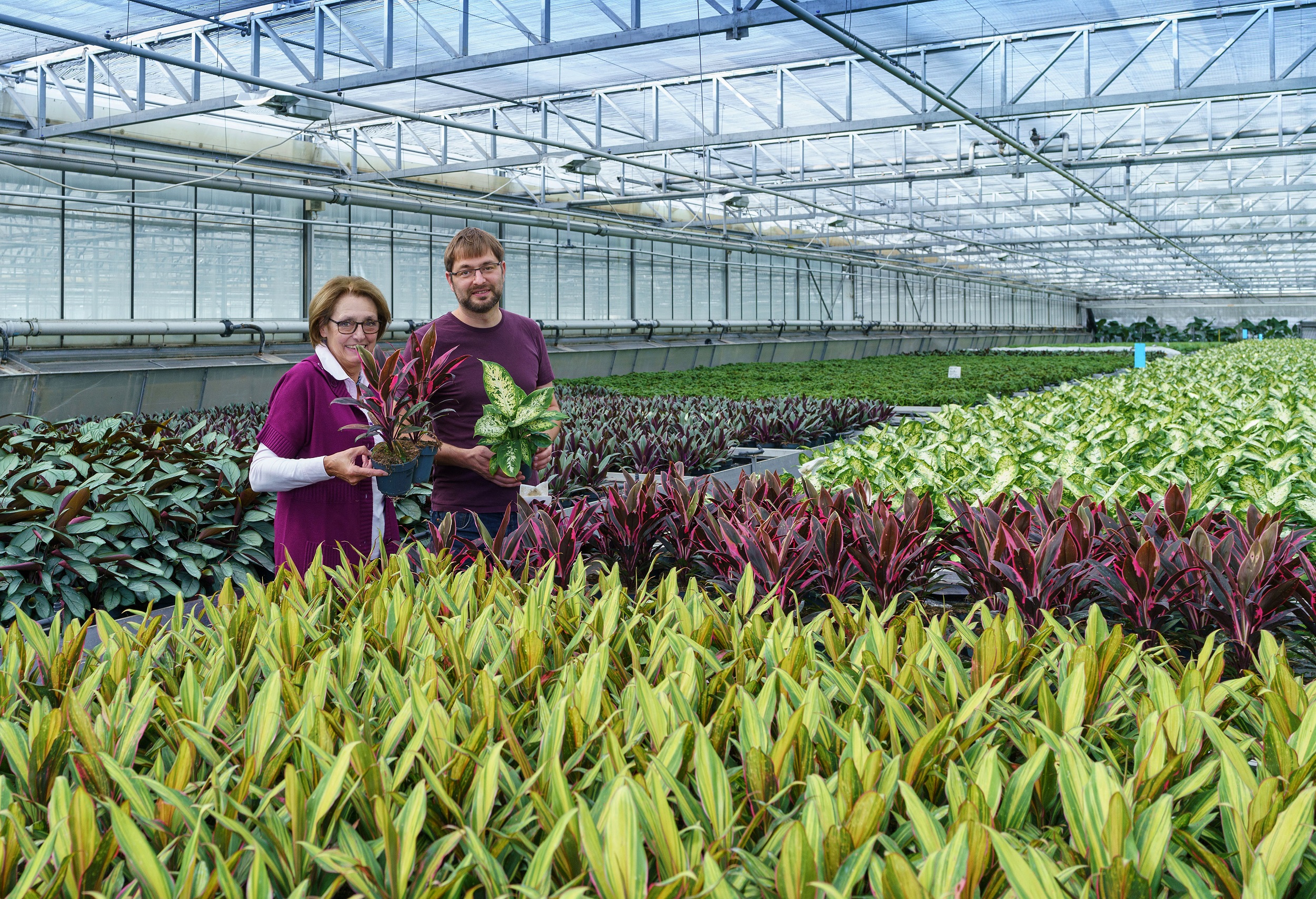 It’s difficult to imagine, but right next to a large lignite-fuelled power station near Cologne, more than 50 varieties of high-quality green plants are being cultivated. The secret of Gärtnerei Pöstges-Haeffs is the love with which the plants are planted and cared for.

We are driving through North Rhine-Westphalia and are on our way to Bergheim-Niederaussem. On this sunny day, the typical shapes of a coal-fired power station appear larger and larger on the retina. Arriving at the location, it becomes evident why: Gärtnerei Pöstges-Haeffs is almost right next to it. The company has even used residual heat from the power plant for their greenhouse heating for years, so we hear later on. But before the interview begins, Marianne Pöstges-Haeffs treats us to sandwiches and coffee. “Welcome to Germany, you have come a long way!” Marianne is 73 years old, always cheerful and full of energy. She also speaks a little Dutch. “When my father was still growing tulips and carnations, I visited the Netherlands quite often and we also had many Dutch people over. You are so wonderfully uncomplicated.”

From tulips to houseplants

The roots of Gärtnerei Pöstges-Haeffs lie in the 1950s, in Königshoven, only a few kilometres away. There, Josef Haeffs started growing vegetables and later carnations and tulips. Daughter Marianne actually had other plans after her Abitur, but the family business called her. In 1969, she joined as a 21-year-old and hasn’t left since. When Königshoven became a lignite mining area in the 1980s, the company was forced to move to its current location in Bergheim-Niederaussem. Pöstges-Haeffs then also switched to garden and house plants because there was a huge demand for those at the time. At the beginning of this century, however, sales stagnated and the popularity of houseplants even reached a historical low around 2010.

In the same year, Marianne started looking for a new auction. Together with her son Rainer, she visited the newly opened Plantion in Ede. “We just wanted to have a look, but at the end of the day we were full members! Why? Because it felt right. The atmosphere, the people, it simply fit. We like to communicate at eye level, which is possible at Plantion.”

The relationship was carefully built on, initially with the supply of poinsettias. “The contact with Plantion remained great, even when the supply was still relatively limited. We felt appreciated.” As soon as the demand for green plants picked up again, many more products were shipped from Bergheim-Niederaussem to Ede. Meanwhile, the market demand for plants exploded. In 2020, Pöstges-Haeffs even doubled its turnover at Plantion, and this year more than 100 percent growth will be achieved again.

Pöstges-Haeffs sells its green plants through various channels and also via the two wholesale companies of son Rainer in Düsseldorf and Cologne. But the bond with Plantion is special. “I am in contact with supply manager Marco Sakkers and supply supervisor Leo Burgers several times a week. The contact is great,” Manager Björn Coenen says. “We would like to supply even more. Not only for the clock and clock presale, but also for mediation.” What began slowly 11 years ago, has turned out to be a match made in heaven. More than fifty varieties of houseplants from Pöstges-Haeffs have precisely the characteristics that many Plantion customers demand: great quality and larger pot sizes. “We have always focused on the florist, with plants that are just a bit bigger and stronger,” says Marianne. “Our plants are given time to grow, we treat them with love.