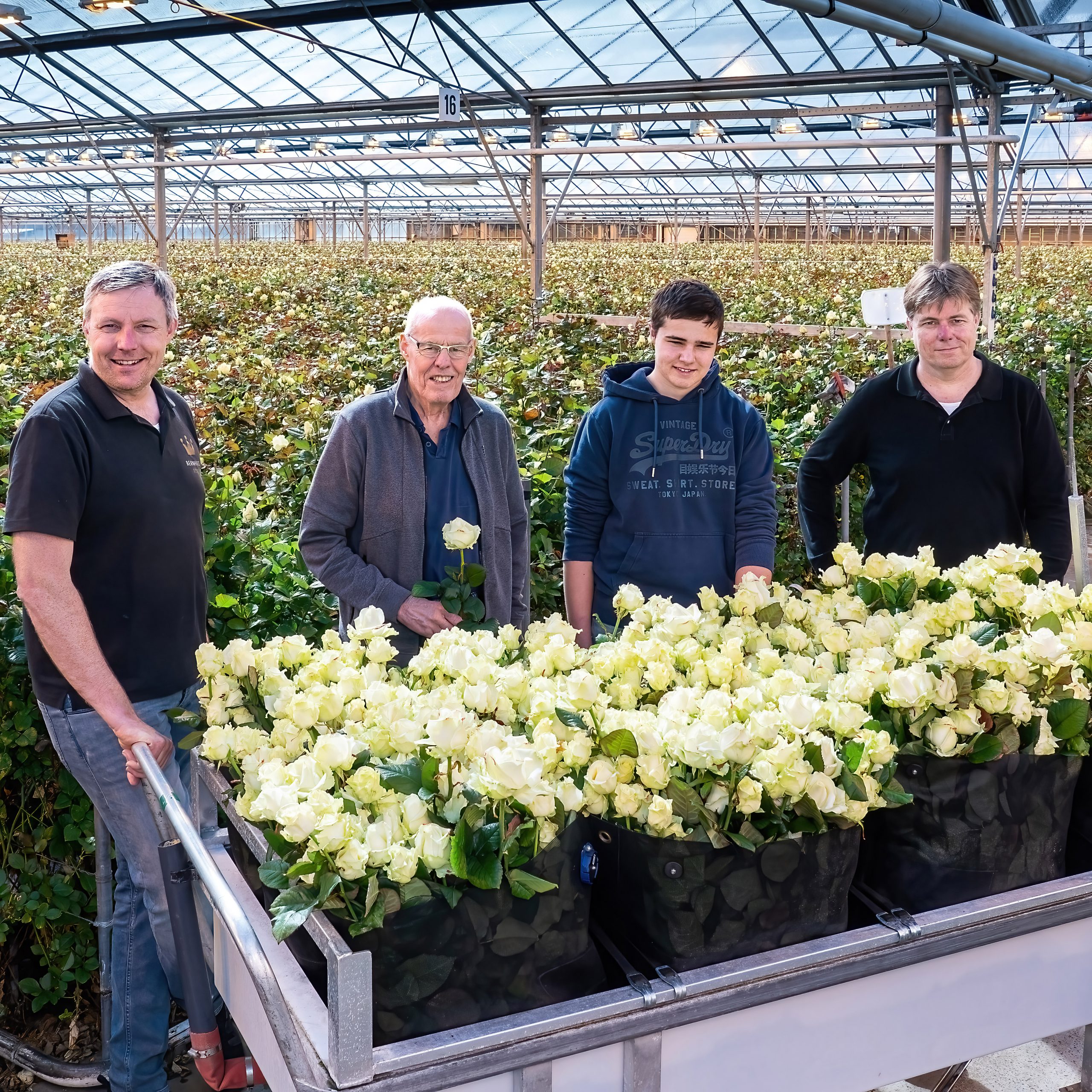 In 1972, Bram Bernhard senior takes the big step to Luttelgeest. Twelve years earlier, as a 17-year-old boy, he has joined his father’s company in Amsterdam, where parsley, cucumbers, endive and other vegetables are grown under flat glass. Bram is ambitious and switches to growing freesias in upright glass, with the company bursting at the seams within a few years. He sees an advertisement in the newspaper for a hectare of land in the Noordoostpolder! When he is invited to a ballotage meeting with the steward, a man named Schuiling, his father vouches for him and he is allowed to go to Luttelgeest. There, Bram sets about building top quality greenhouses (‘they’re still there!’) and starts up his own transport company. His nursery grows from one to two to then three hectares. In 1987, his son Simon joins the company, who, in turn, is followed by Bram junior in 1998. Bram senior officially steps aside in 2000, but continues to advise and assist his sons. By now, grandson William is also active in the company.

In 2021, Kwekerij Bernhard has three successful companies with cut roses, Phalaenopsis and garden plants and a separate company for temperature controlled transport, with products finding their way to the more upmarket retail, cash & carry and garden centres throughout Europe. Some 20 percent go to the auctions, including Plantion. Bernhard may have become ‘a big boy’, but craftsmanship and quality are as important as ever: ‘after all, a good product sells itself’. The fist-sized Avalanche roses are already open when they leave the company, but they still remain in the vase for at least 14 days. The Phalaenopsis collection has more than 200 varieties, but Bernhard keeps searching for additional variants. And, in the meantime, the company has seriously invested in sustainability: “As a contribution to a cleaner world and to create a unique selling position towards our customers.”

The initiative for an energy-neutral company dates from 2014, and is also rooted in healthy self-interest: “We no longer wanted to be dependent on skyrocketing energy prices due to quarrels over natural gas, Brexit, a closed Suez Canal or a fickle government.” After six years of struggle, Bernhard arrives at a field with 45,000 solar panels. What’s more, the company will start using geothermal energy this autumn. Hot water will be pumped up from a depth of 2 kilometres, with this water heating the greenhouses and, once cooled, flowing back into the earth. This will make heating the greenhouses entirely sustainable and halve previous electricity consumption. In the coming years, Bernhard will switch to LED lighting, which means that, from 2025 onwards, every single rose and plant will leave the nursery without the need for the use of fossil fuels. These innovations recently earned the company the title Entrepreneur of the Year in the Noordoostpolder. Bram junior: “We like to pioneer, like when my grandfather started growing vegetables in Amsterdam and when my father embarked on his adventure in Luttelgeest.”